Feel free to add/contact me! ♥

Planning to watch the new Yu-Gi-Oh Movie, Musical 1789 and if I'm lucky even Dream Live 2016!
Soo... if anyone knows anything interesting happening during that time, please let me know!
Also, if you happen to be in Tokyo around that time I'd love to meet up and do something! Go drink a coffee, do some merchandise shopping, watch a show/musical/whatever or ride the rollercoaster at tokyo dome :D
Please let me know if you'd like to do something <3

Soo I’ve seen this Musical twice now. At first I didn’t know what to expect - you know, the life of some classic music composer, how good could that be..? But I was very very positively surprised.
The musical is about Wolfgang Amadeus Mozart, an Austrian composer who already was a prodigy as a child. The musical portrays his personality with 2 persons: The prodigy child that always composes, and the young adult that mostly thinks about having fun and not about responsibilities.

A friend jokingly named him Bishonen-Mozart, because well, look at him :D (the one who always wears white is Mozart). So, yes, this Musical is full of eyecandy, great songs, some drama, lots of fun and a little homosexual tension.
Wait what? Haha yes, you read right. I don’t know what it is with Viennas Musicals, but if you look for it, it seems like you’ll ALWAYS find some slightly gay scenes :D
LET ME EXPLAIN, because that’s what I’m here for, hahaha.

Hieronymus Colloredo: Highly intelligent, a man of education and sophistication and a supporter of the Enlightenment, the Archbishop is at the same time a moral hypocrite and keeps a mistress. The ambiguity of his character also appears in the fact that he is deeply impressed at recognizing Mozart’s extraordinary talent yet still treats him as little more than a lackey at his court. In the end, he demands nothing but discipline, diligence and respect from those around him. Mozart’s impudence and unreliability so infuriate him that in his rage he rips up a new piece the composer has written for him. The foundations of all he holds dear are shaken when he realizes that music has the power to go beyond reason and logic.

Wolfgang Mozart: Mozart is trapped by his past as the child prodigy Amadé during which he was trained to be disciplined and respectful. Now, a grown man, he lives a life of wild abandon, desperately seeking artistic freedom and liberation from his possessive father. Despite this, he still needs his father’s approval and is devastated by the latter’s coldness and lack of understanding. Mozart is impulsive, vulgar, stubborn, chaotic and insolent but also naïve: for example, he lets himself readily be taken advantage of by the Weber family, his wife’s greedy relatives.

My favourite scene is when Colloredo wants to get Mozart back and talks to his father about bringing him back to Salzburg. His father offers to “give him a new prodigy”, his Grandchild Leopold Mozart. But Colloredo gets really angry - “Ahaha… a NEW Mozart? .. You should travel to Vienna, and bring back MY Mozart.” … “ENOUGH! I WANT THE REAL MOZART!”
Pretty obsessed, aren’t we? :D

If you want to know more about it, please let me know, feel free to ask :D If you have the chance, please watch the musical. They still play it until March 2016.

I felt like writing down memories and experiences of my life that I really love remembering.

and a few Doujinshis by Kazuma Kodaka:
https://mega.co.nz/#!ZBk2xbqK!QiqJkPbGQ-qqsJKStJp4-LgXqEIljyhHRTyaLbLjTCY

Hey there!
Not even a month left until my journey to japan, so I'll ask again :3

I'll be in Tokyo from 18th May until 26th May, in Osaka from 26th May until 29th, then in Kyoto until 1st June and from there back in Tokyo until 7th June.

I'm not really up-to-date what happens in Japan at the moment, so I'm asking for advice and tips what to visit and watch :3

Is there anything Tenimyu- or Tenimyu-1st-Season -related happening?
I also would like to watch a musical, I read that Shiki Theatre in Tokyo plays some. Anyone got some experience there? Are there box-office-tickets available?

Also, if anyone wants to meet up and spend a litte time with me, that would be great ^__^ (I travel with two guy-friends but of course Fangirling with GUYS sucks. hard.)

This show deserves more attention.
It took me quite some time, because, heck, there are somewhat like ~214 Episodes, but I enjoyed them all.
(sure, I skipped most of the transformations and spells after a while, but the rest is awesome.)
Yes, I'm talking about a kids show: Ojamajo DoReMi.
On the first view it may be childish show, but if you take a closer look:
- I've never seen such great and HUMAN characters.
- you can learn a lot. About feelings, personalities and behaviour.
- It's funny and made me laugh countless times
- and the thing you thought would be impossible a Kids-show could do to you: Make you cry. Like woah.

And those are just a few points. I love most of the Songs too, because they are quite happy-go-lucky =) Also, the whole show is so well-thought-through.. About frienship, racism, bullying, being a mother, a sister, a daughter,...

Everyone who isn't allergic to cute drawing styles, Magical Girls and (high) child voices: Watch it. It's worth it. (I recommend it in japanese with subtitels though, heard that some other versions are quite messed up)
♥ 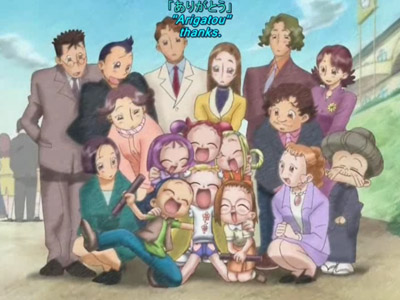 Just watched through my old Tenimyu-Backstage-Videos...
After such a long time it was really refreshing, and made me remember why I loved those Dorks so much.. <3

I'm missing those fun times a little, but it is as it is..

Some series like "how I met your mother" keep me up.

I remember some Fans of the Musical "Elisabeth" being here. Just now the official Musical Vienna Website postet some pictures from Elisabeth Musicals all around the World.
musicalvienna


Guess what Picture is in there?

Isn't this our Shiro-chan? XD~
*amused*